Black Thunder is the third of the Four "Forcemen", A group of bosses added to the Tower of Barbs. He represents the Candle Wolf Faction. Released into the tower on October 25th, 2017

An imposing large male fighter, clad in a golden armor adorned with metal wings, black-scaled leggings and chest armor that resembles a dragon's head. He wields a one-handed double-bladed energy saber in his right hand and a severed, but still functioning Medusa head in the other. 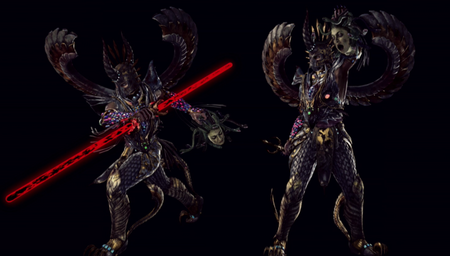 There are currently 3 difficulties of Black Thunder, each in separate special floors in the Candle Wolf Faction area of floors 21-30.

*NOTE: Hard and Nightmare challenges will NEGATE any mushroom effects before entering.

His challenge rooms are on the same rotation timer as the other Forcemen and only appear on:

Black Thunder is a very aggressive Forceman, aiming to chase after you and attack you with close range attacks from his Vajra of Light, or send out his Head of Medusa to chase you down.

Negating Shockwave - the main shared attack of all forcemen, sending a blue shockwave to fill the entire room, once it hits you, Mushroom doping effects that aren't allowed by the forcemen are negated. This attack knocks down on hit and negates effects even if you block it. They are invulnerable during the startup and recovery of the animation.

Vajra of Light Combo - a quick downward slash with his Vajra (dual beam sword) weapon. Blockable, short recovery on whiff. If he hits you, or you are still close enough, he will continue with the rest of the combo, with up to 3 extra attacks.3rd and 4th hits don't combo so you can block or try to roll out after getting hit by the 2nd attack.

Vajra of Light Spin - the special skill of the Vajra, after a short start up, he does a lunging 2 hit spin attack, dealing a lot of damage. The first hit is able to be blocked but the 2nd hit guard breaks. On hit it pushes you back with a short stagger. He is also able to transition to this attack from the basic combo after the 2nd and 3rd hit. Impossible to get away from if up close.

Medusa Head - He sends out the medusa head in his left after you as a tracking projectile, moves a bit slower then the player can run, but persists for an incredible amount of time, upon contact it explodes into a cloud of poisonous smoke that hits multiple times. Black Thunder has a short recovery when throwing it, so hes able to follow after it pretty quickly, the head can be detonated if it collides with other projectiles or something in the environment (ex: statues). The poison is weak and the cloud can affect Black Thunder if he gets caught in the blast too.

Rage Stomp - An attack where Black Thunder stands still and stomps the floor, sending a blue wave across the floor in a complete circle around him, it doesn't do damage, it is able to be blocked, and on hit knocks you down. Upon contact with you, it removes 1 bar of Rage from you. The wave on the floor is able to be jumped over. Black Thunder has a medium recovery after performing this attack, so jumping over it should net you a punish.

Vajra Rage move - the Vajra of Light's rage attack, Black Thunder kneels down, a giant red circle appears in front of him on the floor and after a second, lots of red pillars shoot up from the circle, electrifying you in place. The attack has a lengthy start up, giving you a moment to roll/run out of the area, the area it hits is deceivingly large, so give yourself a good amount of space away from it, it is possible to hit him while hes performing it, but be careful to not get by the pillars while attacking him, the damage on it is generally pretty low.

Medusa Rage Move - Black Thunder does the Head of Medusa's Rage move, Psychic Drain, he holds the head up and a red circle appears and starts to instantly deal damage and gain life as long as you're in the circle, this can drain and let him again a LOT of health if he catches you with it, so mind the blue flame tell of Rage moves. He can walk slowly around during this attack.

Upon defeating Black Thunder, the gate behind him opens up and reveals a single chest, with the possible reward depending on the difficulty Black Thunder was fought at.