A large bee's nest that can be found attached to walls and other out of reach places. You can retrieve a Honeycomb by throwing an uncooked beast at it to knock it down or shooting it down with a weapon.

Stomping/Throwing a Honeycomb will cause a swarm of bees to appear and chase your Fighter and sting them. It cannot be destroyed, and so does not drop a shroom.

Like most beasts, it has a rare golden variant, the Golden Honeycomb.

"Distribution: Primarily Crowley's area."
"Size: 18 in."
"Scientific Name:----"
"The Honeycomb that lives in the Tower of Barbs. Contains highly nutritious larva and honey."

Honeycombs are first encountered on the floors controlled by Crowley. 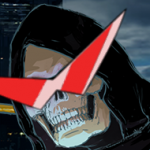