“Ah! Those are the Jackals. They are body collectors. I wouldn't get in their way if I were you. I know I know, they got cool looking equipment, but good luck trying to get it off them.”

The Jackals are a mysterious group that roam the Tower of Barbs after first encountering them on 8F META-KOYA. Composed of Jackal X, Jackal Y, and Jackal Z, they are considered "endgame" enemies, and are hostile to any players who linger on one floor for too long. They are very powerful, and can make swift work of any players who underestimate them. Defeating the Jackals can reward the Blueprints for their gear and the materials needed to upgrade it.

There are stronger forms of the Jackals the higher you go in the tower. These forms are referred to by the community unofficially as "vX" (as in, "version"). Currently, there exist v1, v2, v3, and v4 Jackals.

“The Jackals are a group of collection traders, who come and go in the Tower. Originally, they were hired to gather up all the dead bodies strewn about the Tower, and to then deliver them to the Dons. They were given the name "Jackals", as they take precious items from others. The job they do, is of course, extremely dangerous. So, they are rewarded handsomely for their efforts. As such, they have armed themselves with the best equipment money can buy. They are passionate about their work, and are quick to eliminate anyone who tries to stand in the way of their task. Most who encounter them choose to flee instead of fight. But great things may come to the one who challenges them, and emerges victorious...

For certain, you must stay on your guard.”

Very little is known about the Jackals, as the only information for them comes from Mother Barbs, Uncle Death, or from sources outside the game.

The Jackals are former criminals and former champions of a top secret martial arts championship. As part of their jobs as body collectors, they are required to collect dead fighters as well as any equipment to sell to the black market. The Jackals are armed with equipment far superior to anything that can be found within the Tower, making them one of the deadliest enemies within the game.[1]

According to Uncle Death, they're dispatched by the "Sunflower Ceremony" company. This is reflected in how the Jackals can drop Sunflower Rare Metal, used to upgrade their gear.

At some point, the Jackals left the Tower of Barbs, but returned stronger in the 42F- 49F area.

After being defeated, the Jackals returned to TENGOKU as the Awakened Jackals. Uncle Death noted how they were "red and black and evil-looking now", how their gear looked like it was falling apart, and that "I'm thinking maybe they went and trained up real good in order to kick your ass, Senpai!"

Uncle Death also has a crush on Jackal Z, and hoped the eyepatch in her Awakened form wasn't due to pinkeye.

Some personal information can be seen on the ID Cards that they drop.

The Jackals will only spawn once all the enemies on a floor are dead. After the last enemy is killed, they will appear after about 8 to 10 minutes. A loud alarm will sound to signal each time that a Jackal spawns. The Jackals will spawn one at a time, randomly. The second and third Jackals may spawn in quickly, or may take a few more minutes.

The Jackals will not immediately notice the player (unless they spawn very close in the first place), making it possible to sneak up on them. However, they will eventually teleport near the player's location and attack them, provoked or not. Once in combat, the Jackals will also teleport to get closer to the player if the player moves far enough away. Once defeated, they will teleport away and leave a drop behind.

If all the Jackals are defeated, they will not respawn again on the same floor just by waiting. However, if you move up/down an escalator, and return to the floor you defeated them, then they will respawn again. This strategy only works for the v1 Jackals, as after 40F, the only way you can travel is up, meaning you'll have to fight them on a new floor each time. Otherwise, returning to the Waiting Room and going to any floor will spawn them as normal.

If you’re going up against the V2 Jackals then I would strongly recommend using your Motorcycle Rage on X and Z because they are very effective against them. If you’re using your gun then it’ll be pretty easy to chip away at him use the walls as to your advantage to take cover from his Blaster for Y. It’ll be wise to use your Striker or Attacker on your Fighter with Jackal decals like the 2 Giant Killers for example and some other solid decals that will come in handy. 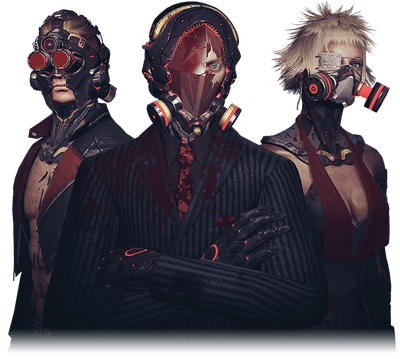