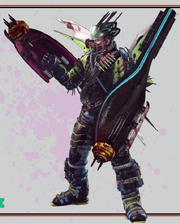 A large male fighter, wearing Dark sports gear with a pale green accents on the side of them, with 2 pairs of insect-like wings on the back, wearing a helmet thats a mixture of different sport helmets, with protruding antennae on the top to help the overall insect theme. He wields 2 massive gauntlets that have multiple functions, such as a pilebunker, or even firing miniature skier figures as a projectile.

here are currently 3 difficulties of Pale Wind, each in separate special floors in the M.I.L.K. Faction area of floors 31-40

*NOTE: Hard and Nightmare challenges will NEGATE any mushroom effects before entering.

*ALSO NOTE: ONLY 5 items can be taken into the fight, (6 if Express Pass is active)

His challenge rooms are on the same rotation timer as the other Forcemen and only appear on:

Pale Wind is the most unique Forcemen fight of them all, only allowing you to take a limited number of items into the fight. His arena consists of an Ice Hockey rink, with 2 giant goals and a few environmental hazards on the walls of the rink. He doesn't take damage normally, most hits do very little damage to him, but after taking some hits he will get tired and be able to be knocked down with an attack that normally knocks down (Fist's Rage attack or even an explosive shroom), due to the ice, will send him sliding across the floor, if you knock him into any of the goals, they explode and deal massive damage to him, beware as this goes you for you too, if you're knocked down you go sliding across the arena, though you can tech roll to mitigate some of the range, if you even accidentally step into the goal you'll be sent flying and probably die. At lower health Pale Wind will start tech rolling too so try to get him close to the goal before tiring him. A complicated fight with still the normal Forcemen timer of 3 Minutes.

Negating Shockwave - Standard Forcemen shockwave, negating certain shroom effects, but Pale Wind's will also take away 1 bar of Rage if it hits, but doesn't if you block it

3 hit punch string - 2 punches into the double fist strike, Decent damage if it hits, but is blockable and even punishable w most things if you do.

Double Fist strike - High damage attack with great range, can be blocked but pushes back a bit, can be punished

Super Kick - short charge into a kick w left leg that shoots a green wind energy out of his leg, great reach, not blockable and knocks down. avoid by running to his right side

Triple Skier projectile - shoots 3 projectiles in a cone, each one does decent damage, so being close enough to be hit by all three is devastating

Explosive Skier projectile - Basically a rocket projectile, he kneels down and shoots a single projectile, explodes on contact, knocks down. good damage.

Rage: Frost Drive - Pale Wind starts sliding on the ground head first, can steer it but not too tightly, does a LOT of damage, if you don't die after being hit, chances are you'll become groggy from the damage.