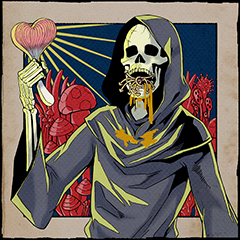 Mushrooms, often shortened to Shrooms, are the resident flora of the Tower of Barbs, presumably brought into existence along with the Tower from the "Earth Rage" tectonic disturbance of 2026. The Tower is filled with gas from the deadly spores of these mushrooms, which has mutated the Beasts that reside within. These spores can be toxic enough for lungs to rot or even cause immediate death with a single breath. They're so prevalent, spores will immediately grow over most corpses upon death, and many corpses can be seen disintegrating into a cloud of spores right before your eyes. Due to this, all residents of the Tower are equipped with a gas mask of some kind to prevent accidental inhalation. In particular, the Mushroom Magistrate is very fond of mushrooms, to the point of obsession, having been driven mad by the amount she's eaten. She has established her own Mushroom Club, where she creates Skill Decals via the compounded mushroom powder in her Mushroom Stews. For prospective Tower climbers, a proper understanding of shrooms and their effects can be instrumental to finding success, as their boosts only become more valuable the higher you go.

Mushrooms can be found in the Tower naturally growing on the ground, often in areas with visible spore growth/residue. They can also grow from the corpses of Screamers and Haters shortly after death. Specific shrooms will grow from killed Beasts, depending on which Beast it was. There are a handful of Quests that give certain shrooms as a reward, and Quests asking for the collection of shrooms are very common. Some shrooms are also given out through Uncle Prime and Login Bonuses. And shrooms may also be picked up through Fighters sent on Expeditions. Be aware that some mushrooms and beasts only appear in certain areas of the Tower. All the mushrooms you've found are listed in the Picture book section of your Underworld Rolodex.

When approaching a mushroom, you can press

for the "Eat" option, and eat the shroom directly off the ground. Press

for the "Death Bag" option, which will store the mushroom in your inventory. Consumable items in your inventory are displayed at the top-right of the screen in the Flick Box. By flicking the

to the left or right, you can cycle through the available items. Pressing the Right side of the

will make you consume the currently selected item. There is no way to cancel eating once it begins, not even from being hit. Pressing the Left side will put you in Throw Mode. While in Throw Mode, you'll hold the item out in your right hand, and pressing

will either Throw the item, or cook it over a nearby Fire, if close enough. Pressing any other button will exit Throw Mode.

The large majority of mushrooms can be cooked to strengthen their effects. This can be done with any Fire you find by using Throw Mode, or with any sources of Fire damage. Mushrooms growing on the ground or placed from your inventory cannot be cooked with Fire damage, but Thrown shrooms can be cooked by it. Golden Mushrooms/Beasts cannot be cooked and are immune to Fire damage. Other non-Golden shrooms, like Skillshrooms, Seasonal shrooms, and Splattershrooms, cannot be cooked either. Barbmeat is a similar consumable item which also cannot be cooked. Typically, cooking shrooms will enhance the effect duration, effect damage, or effect healing of the shroom. If you have the chance to cook your shrooms before an upcoming battle, you should do so. Be careful with fire sources in the Tower, as getting too close to some of them can set you on fire as well. There is a permanent Fire at the brazier next to the Mushroom Club in the Waiting Room where you can cook at.

Finally, there are certain shrooms that only grow during certain times of the year. Winter Whiteout takes place every January and February, with durability-restoring Snowcaps. Each April and May is a Spring Egg Scramble for EXP-rich Eggshrooms. There's Fun(gus) in the Sun every July and August, bringing valuable Parasol Shrooms to sell. And every October and November is a Creepy Autumn, where healthy Pumpkinshrooms with a Rage-boosting stimulant will grow. There are no special locations for these shrooms, they can be found at the same rates at any height of the Tower while they're available. You can still keep these shrooms after the seasons end.

"One of the many attractions of the Tower of Barbs is that several different types of mushrooms can be found within its walls. There are more than 40 different types of mushrooms waiting to be discovered by adventurous mushroom hunters in the tower. Some of the mushrooms spray harmful spores in excess of LC50, of which a single breath causes the lungs to rot, and in some cases, immediate death. Therefore, residents of the Tower of Barbs all wear masks to prevent themselves from accidental inhalation of the deadly spores. A vital skill of anyone in the Tower is the ability to accurately identify mushrooms. Failure can mean the difference between life and death."

While individual mushroom pages may go into more detail, here are some general tips & notes about common shroom usage: