Transparungus are umbrella-shaped mushrooms with transparent caps that have holes in them. They can first be found in Jackson's area and can be found past this point as well.

Eating Transparungus causes the player to become invisible to enemies such as Haters, Screamers, and even some Bosses. While cloaked, players can do just about anything without being aggroed, including attacking enemies. Since these shrooms are stackable, you are able to eat multiple to elongate the effect duration of the cloak.

Transparungus does not work against COEN's Sonar Wave attack because this attack is not sight-based. However, Transparungus lets you move around without making any noise.

The effects of Transparungus can be affected by an enemy that has a Skillmycin, Naspirin, or Not So Fast decal equipped. 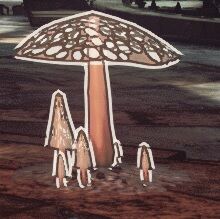